The Foundation Albert Lilar was founded on 4th February 1977 by the family of the late Albert Lilar, who was a former Belgian President of the Comité Maritime International and a very prominent maritime lawyer in Antwerp. The goal of the foundation is to encourage the study of maritime law both on a national and an international level and every three years the foundation awards a Prize to the author of a scientific work that was recently published and that is considered by the Board of Directors to have great merit and to serve the unification of maritime law or the development of comparative maritime law. 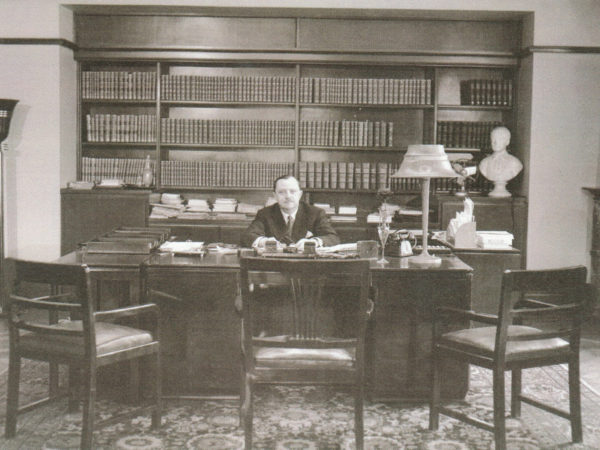 Image: Albert Lilar at his desk

You will find hereafter the message of the foundation inviting authors on maritime law to send their contribution to the Secretariat of the Comité Maritime International.

The CMI would of course wish that its members participate in great number as candidates for the Prize.

The Albert Lilar Foundation will award in 2021 a prize of €2.500 to the author or authors of an outstanding publication which contributes to the unification of maritime law or to maritime comparative law.

The board of directors of the Foundation will act as jury.

The board will take into consideration publications
– written in French, Dutch, German or English;
– published after 14 October 2016 and before 15 October 2021;
– which have been sent in in three copies to the seat of the Foundation: Ellermanstraat 46, 2060 Antwerpen, Belgium, no later than 15 October 2021

The submitted books shall not be returned.

The object of the award is to encourage young talented authors.

The board shall not consider:
– articles and similar contributions;
– dissertations, and other study papers, unless commercially published.

The Board’s choice is discretionary.

The Board may
– elect a publication of its own initiative even though not submitted;
– decide not to award the prize.