The 27 June 2022 the Italian Maritime Law Association organized a Seminar (encl.1) to celebrate the centenary of the birth of Francesco Berlingieri, who was born in Genoa the 20 February 1922.

Francesco Berlingieri so much contributed to international maritime law and had a major role in its development in several fields and in the formulation of many international instruments.

The Italian Maritime Law Association felt appropriate to record his involvement and the part he played towards the successful completion and adoption of the United National Conventions on Contracts for the International Carriage of Goods Wholly or Partially by Sea.

The Seminar was therefore titled Francesco Berlingieri and the Rotterdam Rules – in the 100° anniversary of his birth.

The Seminar was also the occasion to announce the establishment of a Prize in memory of Francesco Berlingieri, to be awarded annually to the winning Essay on a topic relating to maritime law.

The AIDIM Sailing Challenge Cup Regatta was organized again in 2022, on 30 September (encl.2), after two years suspension due to the pandemic.

The Regatta was made possible thanks to the valuable support of the Yacht Club Italiano, founded in Genoa in 1879, the oldest sailing club in Italy and one of the oldest in the Mediterranean. It comprised 3 races which were run on Beneteau First 7.50, with teams of five members of the Italian MLA in the crew.

It was to be raced in the historic waters off the Lido d’Albaro, in Genoa. However, as the weather conditions were very severe, the Race Committee decided to move to a race field more close to the Genoa port entrance, which presented lighter winds.

After three close races the overall winner was Nella with Simone Moretti and his crew. Artica helmed by Giuseppe Duca came second, followed by Bona, helmed by Francesco Campodonico, and Leda, helmed by Luca Ancis.

At the end of the races, a lunch at the Yacht Club Italiano ensued, followed by the Challenge Cup giving ceremony together with prizes to all participants.

2022 also marks the 80th anniversary of the Italian Code of navigation, which was adopted the 21 April 1942.

On 13 December 2022 (encl.3) the Italian Maritime Law Association, together with the Italian Coast Guard and with the participation of the Journal Il Diritto Marittimo, organized a Seminar to address on the developments and changes in maritime law and on what still remains of the legacy of the Code of navigation.

The distinguished speakers included the Head Admiral of the Italian Coast Guard.

The Seminar concluded the 2022 activity of the Italian Maritime Law Association and was followed by a cocktail to exchange Christmas Greetings. 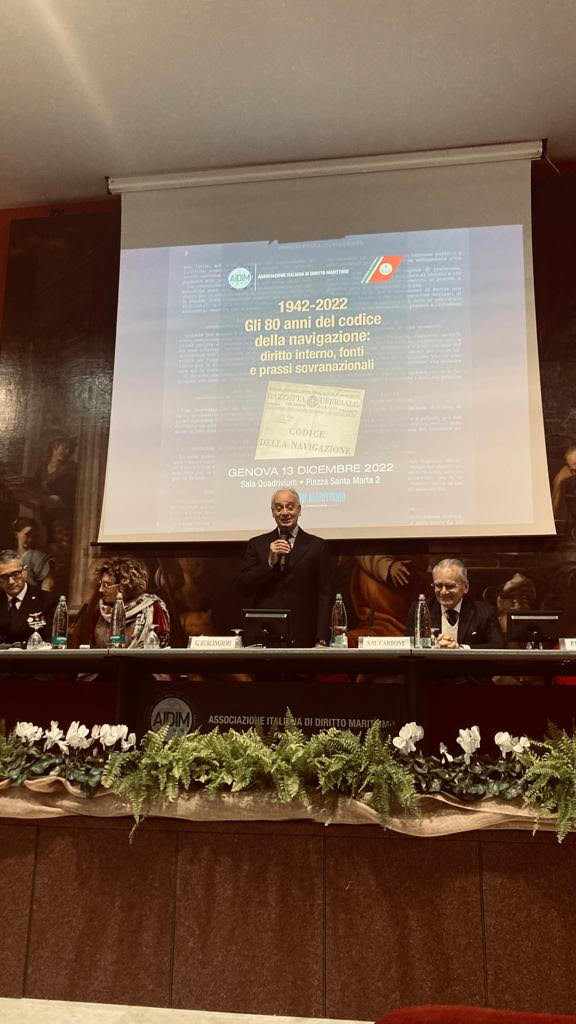 A photo during the welcome speeches at the Seminar of the Italian MLA on 13 December 2022. From left to right, Admiral Sergio Liardo Head of the Coast Guard for the Region Liguria, city councilor Marta Brusoni, GB and Professor Sergio M. Carbone a Titulary Member of the CMI